If you read my blog post Fearless 2017 Predictions: South Bay Real Estate from January, my first and most confident prediction was that mortgage rates would barely rise. Regardless of rate increases, The Fed was planning to reinvest principle payments into mortgage-backed securities (MBS) to keep home loan interest rates lower. In my follow-up post, Stop Worrying about Rising Home Interest Rates, I discussed how The Fed was continuing this policy with the famous clip from Federal Open Market Committee (FOMC) Statement:

The Committee is maintaining its existing policy of reinvesting principal payments from its holdings of agency debt and agency mortgage-backed securities in agency mortgage-backed securities and of rolling over maturing Treasury securities at auction, and it anticipates doing so until normalization of the level of the federal funds rate is well under way. This policy, by keeping the Committee’s holdings of longer-term securities at sizable levels, should help maintain accommodative financial conditions.

That statement had remained relatively unchanged for years. My bet was that as long as that statement held true every six weeks then home mortgage rates would continue to hold at all-time lows. Unfortunately, that statement has slowly started to be revised over the last few months.

The Committee currently expects to begin implementing a balance sheet normalization program this year, provided that the economy evolves broadly as anticipated.

The Committee expects to begin implementing its balance sheet normalization program relatively soon, provided that the economy evolves broadly as anticipated; this program is described in the June 2017 Addendum to the Committee’s Policy Normalization Principles and Plans.

So, what does it mean and why should we care in South Bay residential real estate? There are three things agents, like myself, and readers of this blog need to consider: 1) What is The Fed actually doing, 2) How this could affect mortgage rates, 3) Coming to your own conclusions…and my conclusions.

What is the Federal Reserve Doing?
Over the years, The Fed has been reinvesting principle payments of mortgage-backed securities it owns into more mortgage-backed securities. In short, The Fed is creating demand for real estate mortgages thus pushing the price of interest rates down. If they stop buying, in theory there is less demand. So to attract more buyers to buy real estate debt (fund mortgages so to speak), rates would need to rise to attract those buyers (aka lenders). The Fed is artificially keeping interest rates down. 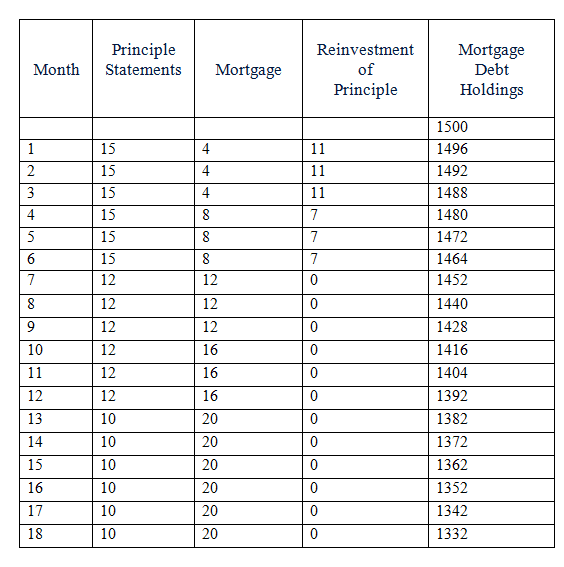 Confused still? Well…what really matters is that The Fed is buying fewer mortgages. Period. And someone else will have to buy them to keep rates low.

How Could This Affect Mortgage Rates?
The chart above is an “illustration,” not actually what The Fed’s numbers will be. I read an example from the New York Fed and they started their “illustration” with $20 billion a month in principle payments. So what is the real number? How do we know principle payments will come down over the months and not grow?

It was stated in a CNBC article earlier this year that The Fed was responsible for half of the mortgage debt purchases two years ago. If that number is still correct and we assume the above chart, then The Fed is reducing $4 billion of the $30 billion monthly market which is about 13% of the market.

Some experts have said that the size of the MBS balance sheet and this accommodative policy has kept mortgage rates artificially low by about 1%. So if you run wild assumed calculations based off “illustrations” 13% of 1% is about 1/8th in a mortgage rate.

Not following? Neither am I as this is a wild guess on fake numbers as I try to make sense of it all.

Coming to Conclusions
The conclusion is that there really is no conclusion. We are in uncharted territory with The Fed and this has never happened in history. What you have to decide is: will rates rise, will they fall, or will nothing happen? My recommendation is to watch the results very very carefully as there could be huge consequences.

My take is that The Fed in various minutes and statements left the door open to change this normalization whenever they want. I think they want to raise mortgage rates at a snail’s pace, but raise them nonetheless. If things start to get shaky in the mortgage market, then The Fed will step in and bring rates down.

I believe rates will increase by about 1/8th of a percentage in the first leg of this experiment. The Fed will watch how it affects the real estate market and go from there. Janet Yellen and her economists are in full control and there is no way they will let rates jump by more than 1% in the next year or that would have a huge effect on home prices.

Look for rates to climb ever so slightly through the end of the year but nothing that will affect the South Bay real estate market in any meaningful way.

Email a copy of 'South Bay Real Estate – What’s Happening with Mortgage Rates?' to a friend